Methadone, known commercially as Dolophine, Methadose and Methadose Sugar-Free, is an opioid pain reliever. Its make up is similar to morphine's.
Methadone is typically used to relieve moderate to severe pain that couldn’t be treated by a non-narcotic pain reliever. [ref] http://www.drugs.com/methadone.html [/ref] 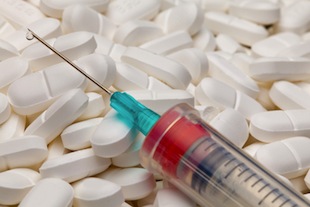 Interestingly, Methadone is used in De-Addiction settings to treat heroin addiction. The drug helps to prevent withdrawal symptoms in patients addicted to opiate drugs. Acting as a substitute for the real thing, methadone produces a less-intense effect, and helps addicts avoid withdrawal symptoms—especially for those who haven't used an opioid in a while. [ref] http://www.methadoneaddiction.net/ [/ref]
Never try to take methadone on your own as a way to treat your addiction.
Like other pain relievers, the drug works by changing the way the nervous system and brain responds to pain.

Methadone Addiction—Dangers of the Drug

Often, the biggest problem with treating an addiction with an addictive substitute is the medicine becomes the new addiction. And people who were previous heroin addicts feel like they can never stop taking methadone, because if they do the withdrawal symptoms will be too horrible. This isn’t always the case.
Often methadone addictions begin because one of the following happens:

How is Methadone Made?

Methadone was first developed during World War II by German Chemists. The drug is a "synthetic" opioid requiring a laboratory setting to be synthesized. [ref] http://www.erowid.org/archive/rhodium/chemistry/methadone.html [/ref]
In its purest form, methadone is an odorless white powder that dissolves easily in liquid . . . making it easy to inject.

When meth is abused, it is allegedly one of the most dangerous drugs on the street.
Using methadone produces effects similar to the use of common opioid drugs like Brown Sugar, or OxyContin. Methadone treatment makes the user feel sedated, and relaxed.
As the drug is consistently used, tolerance to the effects of methadone develop, and users have to consume more to get the same feeling as before. The effect on the user's brain can last up to 36 hours—making him "sluggish" or "groggy" for that period of time. [ref] http://www.camh.net/about_addiction_mental_health/drug_and_addiction_information/methadone_dyk.html [/ref]
There is no "rush" with methadone because its effects develop slower than most drugs. Meth users often expose themselves to: HIV potential (needle sharing), poisonous build-up in the body, and death. [ref] http://www.enotes.com/methadone-reference/methadone-176978 [/ref]a
Mixing Methadone with alcohol can cause death.

Just because a doctor proscribes it, doesn't mean it's safe. Follow the doctor's orders closely, and stop using the drug when your doctor tells you to. You should be able to wean yourself off it, with out withdrawal.

Crack Cocaine
Crack Cocaine WHat is Crack Cocaine? Commonly referred to as crack, rock(s), sleet, base, cloud, hard ball, and nuggets, crack cocaine is the crystal form of pure cocaine, which is usually a white powder. Crack cocaine has a yellowish-white tint... Learn More
LSD
LSD LSD Known as the world's most powerful hallucinogen, LSD is a potent mood-changing chemical. Also called acid, blotter and dots, the drug has been abused for its hallucinogenic properties since the 1960s. Scientists originally manufactured LSD to help psychiatric... Learn More
Ecstasy
Ecstasy What is Ecstasy? For Rs 1,200 per pill, Ecstasy remains a drug primarily abused by the upper class and by those "forced" to pay the high tab due to a developed addiction to the drug. Ecstasy is the street... Learn More
Charas
Charas What is Charas? Hand made in Afghanistan, Pakistan, Nepal and India, Charas is a hashish form of cannibis and is widely used in India. [ref] http://en.wikipedia.org/wiki/Charas [/ref] The cannibis plant, the same plant used to make marijuana, grows mostly... Learn More
Crystalline Methamphetamine
Crystalline Methamphetamine What is Crystal Methamphetamine? Crystal methamphetamine—probably better known as "crystal meth", or just "meth"—is a white crystalline drug abused by people of all ages. Meth users experience a sudden "rush" of pleasure, strong feelings of confidence, hyperactiveness and... Learn More
Find Help Using Our Platform