What is OxyContin (Oxycodone)?

OxyContin became a legal prescription drug less than 20 years ago. The narcotic pain reliever is a derivative of opium; its active ingredient is Oxycodone. 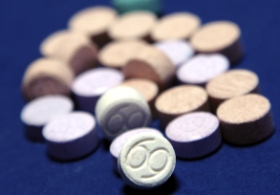 When used correctly, OxyContin provides extended relief from pain associated with cancer, back pain or arthritis. However, this drug is often used for purposes unintended by those who prescribe it. OxyContin is a dangerous drug gaining in popularity and availability.
http://www.fda.gov/Drugs/DrugSafety/PostmarketDrugSafetyInformationforPatientsandProviders/ucm207196.htm

Why is OxyContin Abused?

If used incorrectly, OxyContin can give its users a brief sense of elation, happiness and well-being. This euphoria demonstrates the key reason people abuse OxyContin. Prolonged and chronic use of the drug can easily develop an addiction or dependence to OxyContin.
Though the new form of the drug makes it harder for addicts to crush and abuse, OxyContin remains widely available. The drug does requires a prescription to be obtained legally, but illicit channels have developed a huge market in India, making it easy to get ahold of the drug without a doctor's consent.

How is OxyContin Abuse?

When used correctly, OxyContin is taken exactly as prescribed. Typically this means swallowing one pill every 12 hours. Drinking plenty of water aids the drug as it slowly releases the Oxycodone into your body.
Those abusing OxyContin admit the drug into their bodies a couple different ways. Pills are usually administered one of three ways:[ref] http://injury-law.freeadvice.com/injury-law/drug-toxic_chemicals/oxycontin_side_effects_uses.htm[/ref]

The Dangers of OxyContin

OxyContin pills are designed to release their active ingredient into the person slowly, usually over 10 to 12 hours. When addicts choose to break the rules and speed up the process by chewing or grinding up the drug—problems arise.
The high from an overdose (by chewing, snorting or injecting) is usually immediate and intense, but the long term effects are terrible:

Of course there are many other dangers of abusing OxyContin like contracting HIV from contaminated needles, or developing clinical depression. The main point we'd like to communicate is: please stay away from drugs like OxyContin.
But if you're addicted, there has never been a better time to get help than right now.

Nicotine
Nicotine What is Nicotine? Tobacco has a rich history, dating as far back as the sixteenth century. The initial controversy with tobacco use was social acceptance. When addicts would use the drug people would complain about the hygienic aspects of... Learn More
Tranquilizers
Tranquilizers What are Tranquilizers? Tranquilizers are a unique and potentially dangerous class of drugs used to induce states of relaxation and feeling of artificial tranquility. Individuals struggling with mental health issues and frequent anxiety attacks often use tranquilizers to help... Learn More
Marijuana
Marijuana What is Marijuana? Also known as ganja, pot, herb, grass, kif, weed, Mary Jane, reefer, skunk, chronic, boom, and gangster; Marijuana is a drug commonly abused throughout India. A blend of stems, seeds, and leaves from the cannabis sativa... Learn More
Charas
Charas What is Charas? Hand made in Afghanistan, Pakistan, Nepal and India, Charas is a hashish form of cannibis and is widely used in India. [ref] http://en.wikipedia.org/wiki/Charas [/ref] The cannibis plant, the same plant used to make marijuana, grows mostly... Learn More
Find Help Using Our Platform